Based in Hong Kong, Jackit Wong, economist at Coface, draws up a panorama of the Chinese companies’ credit risk. She is also explaining the impact of the new Chinese « VAT » on the construction sector.

• How will the China corporate payment evolve in 2016?

The deterioration observed in 2015 will worsen. Last year, 81 % of the companies questioned * (that is 8 out 10) have indicated facing an overdue experience. 58.1 % of them reported an increase in overdue amounts (to be compared with 45 % in 2013). Furthermore, the average overdue is longer than 150 days (5 months) for about 9,9 % of the companies dealing with a delay of payment (against 5 % in 2014). Besides, 17,9 % of the companies confronted with an ultra-long overdue amount of more than 180 days (6 months) calculate that their amount exceeds 5 % of their annual turnover. Their financial conditions will be affected, especially if their access to the banking liquidities is closed. Moreover, these corporate won’t benefit from a strong global demand. According to our 2016 expectations, the Chinese GDP growth will only reach the bottom of the range established by the government, namely 6,5 %. The 6,7 % GDP growth in the first quarter came in line with market expectations, however, Chinese activity is usually best during the first half of the year. Thus, we can assume that this last first quarter would be the strongest of the year.

• What sectors will be the most affected by the overdue payment?

The situation has considerably deteriorated in the metals, directly affected by the industrial slowing down, and in the construction. Our survey shows that, in this sector, the number of companies to undergo an overdue of more than 150 days has increased from 11 % in 2014 to 28 % in 2015. In addition, 57 % of them (against 36 % in 2014) reveal having more than 2 % of their total sales in over 6 months’ overdue. The global optimism’s deterioration, explained by the economic growth deceleration, is damping real estate investment sentiment. It is especially true in the “tier” 3 and 4 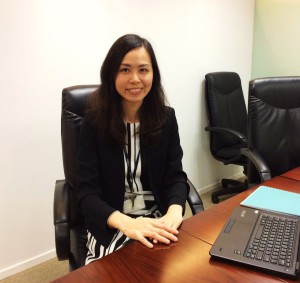 urban areas, which are still confronted with huge overcapacity. On the contrary, in major urban areas (“tier” 1 and 2), the prices are appreciating again, carried by a rebound in demand. This phenomenon will continue. At least three years will be needed to erase the more off-centered regions’ oversupply. Often working in the major cities, their residents prefer living closer to their workplace. Thus, they are looking to relocate themselves there, thanks to the financial support of their parents, who are ready to exchange their “tier” 1 or “tier” 2 residence against a “tier” 3 or “tier” 4 residence, when they retired. This trend is not particularly favourable to the revitalization of the less urbanized regions. Having said that, the real estate construction is benefiting from factors of support at the moment, like the tax cut for the home transactions, or, the ease of mortgage down payment requirement. From a longer term perspective, the OBOR (« One Belt, One Road ») initiative could also contribute to the construction sector’s dynamism.

• On the contrary, what sectors will prosper this year?

The risks are manageable in the retail and in the automobile sector. Two sectors, in particular, are in good health, paper-wood and pharmaceuticals. Paper-making enterprises are enjoying steady net profit margin and the majority of them are making a profit. The digitization could have affected them, but they are taking advantage of the Chinese middle class expansion, more attentive to the quality of products, to their packaging and to their sophistication. Now, they are keen to buy more solid wooden furniture. As for it, the pharmaceutical sector is benefiting at the same time, from the increase of the disposable income of the Chinese household (more inclined to spend in favour of their health), and from the ageing of the population, which lives longer. Even if the barriers to entry are restrictive, the income potential is undeniable. Without counting the measures introduced by the government, in order to strengthen the medical care’s access.

• Could the occurence of some credit defaults destabilize the Chinese financial system?

As a matter of fact, the major concerns are coming from the loans which are not referenced, which are part of the “Shadow banking”. Consequently, the whole debt of the non financial private sector reaches 205,2 % of the GDP (in the third quarter 2015). Initiating a beginning a stabilization, this level does not yet reflect a clear deleveraging. (See graph above, left). A way of reducing this significant imbalance would be to provoke a transfer of the colossal Chinese households’ savings (representing more than 50 % of the Chinese GDP, to compare with 25 % for the European households or with 20 % for the Americans). In the meantime, the very careful People’s bank of China (PBOC) continues to supply the banks’ liquidity. From this perspective, the monetary authority regularly injects money to the interbank market, eases « reserved requirement ratio » (RRR) or lowers interest rates. Another activity engine is the expansionist fiscal policy of the government, which plans to increase its spending by 7 % with regard to 2015.

• What do you expect from the “debt equity swap“ program?

We do not know all the details now. The possibility of transforming its debt into equities may be proposed to companies suffering from liquidity shortage, while being endowed with a sustainable business model : The banks won’t accept an outbreak of the risks housed in their balance sheets. According to this hypothesis, this program could actually favor a business resumption, contributing, at the same time, to the deleveraging of the global economy. Additional advantage, this initiative could encourage the arrival of other shareholders, like banks in this particular case. It could help the diversification of the equity market, still retail dominated.

• What will be the “VAT” effects in the construction?

The replacement (on May first) of the « Business Tax » (BT) by the Chinese « Value Added Tax » (VAT), may not favour the sector in every case. Its 11 % rate, applied to the construction services, is higher than the BT, which was 3 %. Having said that, the construction services enterprises, like any other service providers, can claim for input VAT to reduce the tax burden. As the VAT is assessed on a net basis, in relative to BT, which is assessed on a gross basis (outputs only), a direct comparison between the two rates would not give a full picture. Besides, there are multiple exceptions : For example, small and medium-sized enterprises with a turnover under 5 billion Renminbi will only deal with a VAT rate of 3 %. Another modification, the total sum asked in payment to the consumer will include the part of VAT bound to the service provided (« Output VAT »). As a consequence, the customer could observe an increase in the final sale prices. This factor could eventually imply a slowing down in the demand. On the other hand, a sector, which could benefit from the new VAT rules, is the leasing, allowing the companies to increase their amount of VAT deduction (« Input VAT »).