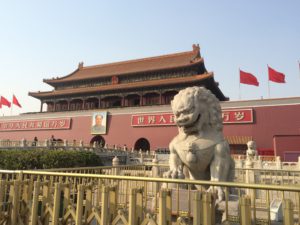 (Disponible en Français) A crucial meeting of the Chinese political and economic life, the « two annual conferences » of Beijing will be held, as usual, at the beginning of March. The first annual session of the 13th National People’s Congress (NPC) will start on March 5th, whereas the first session of the 13th Chinese People’s Political Consultative Conference (CPPCC) will begin March 3rd. This year’s gathering is particularly significant as it will reveal how changes made at the 19th National Congress of the Communist Party of China (from October18th, 2017 till October 24th, 2017) will impact government appointments. The « two annual conferences » program is dense in this lunar year of the Earth Dog. NPC deputies will deliberate on a draft revision to the Constitution. The 13th NPC session agenda includes also a review of the government work. Reports on the implementation of the annual plan for national economic and social development in 2017, the draft plan for national economic and social development in 2018 will all be examined, as well as the central and local budgets’s implementation in 2017 and the central and local budgets’s draft for 2018.

« Widening the capital market liberalization may also be debated »

What do the investors expect from this first annual session of the 13th NPC?

They are going to watch for the 2018 GDP growth target, which will be revealed by the government. For my part, I foresee a 6.5 % growth rate, to compare with 6.9 % in 2017. The investors may also look precisely at the renewal of the government (State Council) on the agenda. The reshuffle will be in accordance with the approach adopted by 19th National Congress of the Communist Party of China (last October), during which the power of president Xi Jinping was strengthened. At the moment, the Prime Minister, Li Keqiang is assisted of four Vice Premiers, who oversee various industries, of five State Councillors and of a Secretary General. One position will be of concern, that of the Vice Premier in charge of the financial affairs, a post encumbered by Ma Kai (who has reached his age limit). His replacement will also take the orders of the new centralized body responsible for the country financial regulations, the Financial Stability and Development Committee.

Is the PboC role going to evolve, with the new financial regulatory implementation?

The Financial Stability and Development Committee will lead all the country financial regulation (the China Insurance Regulatory Commission, the China Securities Regulatory Commission, and the China Banking Regulatory Commission) in order to optimize its execution and coordination. The new agency, established within the State Council, will also oversee the monetary policy. In a way, the government involvement in the People’s Bank of China (PboC) decision-making is being officialized. In practice, it does not really change the Chinese monetary policy governance, as the PboC has always reported its decisions to the State Council.

What will be the Chinese development priorities in 2018?

The plan for national economic and social development concerning 2018 (that will be presented during the first session of the 13th NPC) could describe new initiatives in order to deepen the State-owned enterprises (SOE) restructuring and to eliminate the « bad » debt. China’s modernization continuation, symbolized by the « new economy  » emergence, may also be the very heart of the discussions. The furtherance of the fiscal reform could also be on the agenda, to promote the technological innovation or the private investment. Widening the capital market liberalization may also be debated.